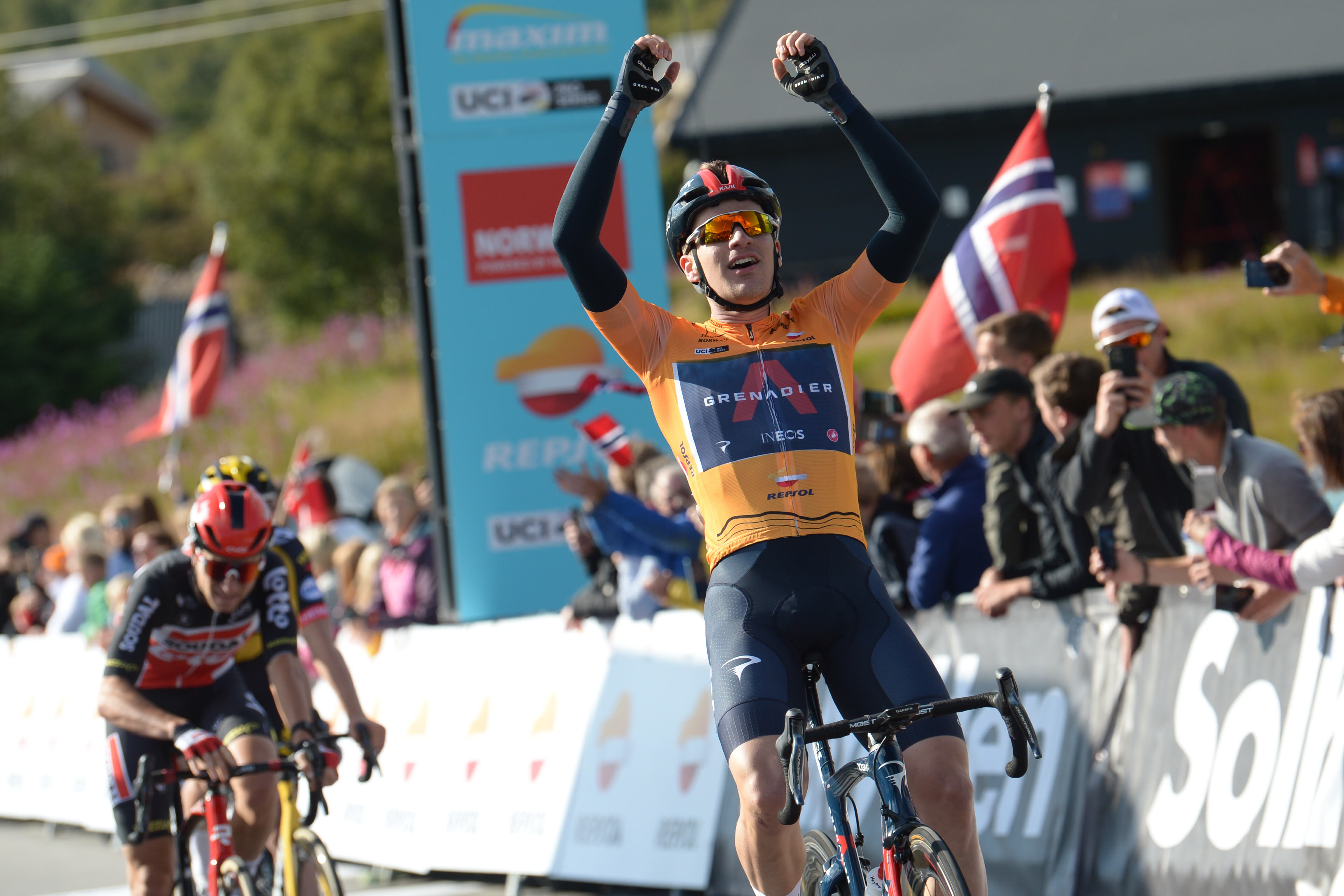 The young british talent did it again, this time ahead of Tosh Van der Sande (Lotto-Soudal) and Mike Teunissen (Jumbo-Visma) in a hilly sprint finish at the ski resort of Sirdal.

Quickly after the start at Tjøromfjellet, riders got in the break. Norwegian champion Tobias Foss (Jumbo-Visma), Anthon Charmig (Uno-X), Emil Schandorff (BHS-PL Beton Bornholm), Olav Hjemsæter (Team Coop) and Christian Kjeldsen (ColoQuick) built up a gap to about 2 minutes 22 seconds when reaching Tonstad for the first climb of the day.

After 3.2km at 7.2%, Charmig took the first Maxim KOM summit in Fed in front of Schandorff. The only rider from yesterdays break joining in today. Another revisit, for the first intermediate sprint in Egersund, where stage 1 started. No contest for the sprint, but Team Coop's sprinter Hjemsæter took the maximum points in front of Schandorff. Thirty kilometers later, the breakaway reached the second intermediate sprint in Vikeså with a gap kept by the peloton under 2:30. No fight for points once again as the riders tried to maximize their advantage leading into the final part of the stage. Tobias Foss was the first over the line this time. The riders went then trough narrow roads until Gloppedalsura where Charmig made sure to get the maximum KOM points available. His mission was done for the day and he soon after left his breakaway companions fight against the peloton in the valley leading to the finish of the stage.

The pace went up in the false flat section between Byrkjedal and Sirdal with 40 kilometers to go. After Charmig it was Christian Kjeldsen who couldn't keep up with the other riders of the breakaway. No regrets for Kjeldsen as the peloton caught the rest of the break with 20 kilometers to go as the riders where reaching the top of the false flat valley section. As soon as the breakaway got caught, a group of ten riders including the Repsol yellow jersey holder, Ethan Hayter, got away. They kept a small gap with the peloton for a few kilometers until reaching Sinnes. A few riders tried their luck in the final kilometers but the peloton stayed complete when arriving the bottom of the final one kilometer climb.

Alexander Kristoff took then the lead of the peloton leading out his teammate Sven Erik Bystrøm. He went aside with 500m to go. Bystrøm launched his attack and stayed in front for 450m until Ethan Hayter passed him to claim his second stage victory in a row!