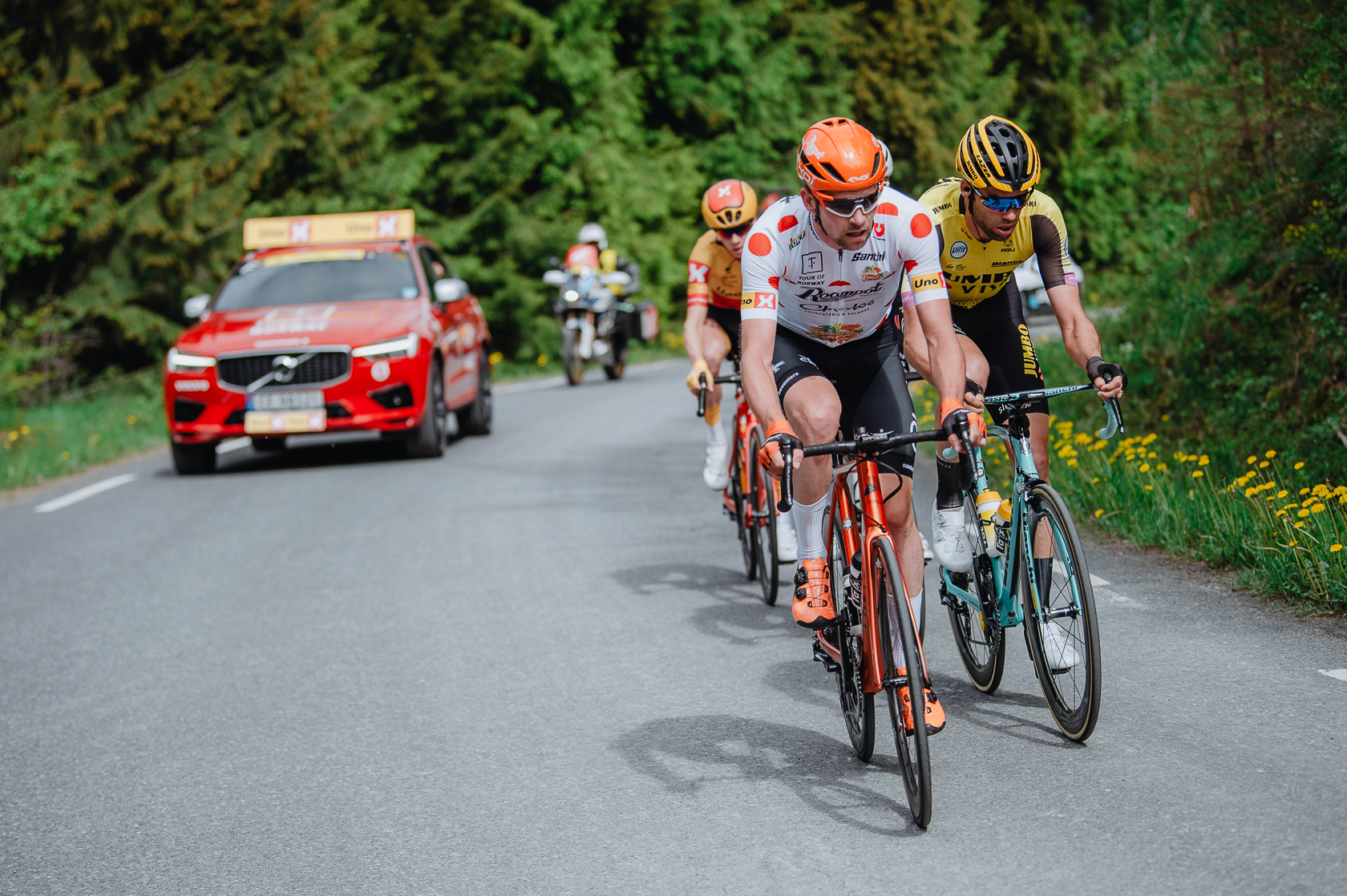 How the 2019 climber’s jersey was won: the breakaway technique

With 12 climbs and a total of 234 points distributed, it would be natural to think that the margin between the first and the second place of the mountain classification would be somewhat significant. Yet, it is only one point which separated Elmar Reinders from Marc Hirschi after 6 stages!

First and foremost, let’s explain how the system works. The climbs are divided into three categories depending on difficulty, each category providing a different amount of points. The first category climbs rewards the six first riders reaching the summit with 10, 9, 8, 7, 6 & 5 points, the second category climbs provide points to the six first riders as well with 6, 5, 4, 3, 2 & 1 point and the third category climbs treat the four first riders as follows: 4, 3, 2 & 1 point. Out of the twelve climbs of the 2019 edition, two fell in the first category, four in the second and six in the third. The rider with most points gets to wear the Sommervibber climber’s jersey.

A proper reward for breakaway enthusiasts

With climbs located in the middle part of the stage, the first race day was a perfect opportunity for riders in the breakaway to get the Sommervibber climber’s jersey. Fridtjof Røinås made no mistake, passing both climbs in first position. At the end of the first stage he could proudly don the jersey. His big smile on the podium was revealing how happy he was to succeed in getting it.

On the second stage, two climbs were also on the rider’s route towards Mandal. Among the 7 riders in the breakaway, 2 decided to fight for the Sommervibber climber’s jersey: Henrik Evensen of Joker Fuel of Norway and Markus Hoelgaard of Uno-X Norwegian Development Team. Hoelgaard was the fastest to reach the top of Ravneheia (3rd category) but Evensen managed to beat him on the second ascent of the day at Ballestad (2nd category). They both collected 9 points in the stage, one more than what Fridtjof Røinås had. Henrik Evensen being the only one to pass a 2nd category climb in the lead, he got to wear the Sommervibber climber’s jersey. After 2 stages, the jersey stayed in the Joker Fuel of Norway team.

The following day, a 3-men breakaway formed quickly, and it is Andreas Vangstad of Joker Fuel of Norway and Nikita Stalnov of Astana Pro Team who fought for mountain points. They managed to collect 9 points each. Yet, none of them got to top the mountain classification ranking as Markus Hoelgaard escaped from the peloton on Kleivtjønn climb to take 3 points behind the breakaway. The Uno-X Norwegian Development Team took the lead with 12 points becoming the third different Sommervibber climber’s jersey holder in three days.

Two 3rd category climbs were on the menu of the fourth stage, not enough to threaten Markus Hoelgaard’s position though. Daniel Turek and Anders Skaarseth both collected 7 points and stayed 5 points behind Hoelgaard in the mountain classification.

Big points were up for grabs in the last stages

At the start of the fifth stage, two-thirds of the race was done but less than half of the mountain classification points had been distributed. The last two stages were featuring a 2nd and a 1st category climb each.

The penultimate stage between Skien and Drammen was the shortest of the 2019 edition which made it somewhat more nervous. It took 35 kilometers before a breakaway of 5 riders took form. Elmar Reinders was part of the escapees for the third time in five stages. In the first 2 race days he gathered 8 points, passing first on top of Reshjemheia climb after 75 kilometers gave him 6 more. A few kilometers later, at the start of Meheia climb (1st category), the breakaway got caught. A few riders attacked in the 11,7-kilometer long climb and the strongest was Marc Hirschi who reached the top first together with Remco Evenepoel. The two youngsters managed to stay away from the bunch for more than 90 kilometers before eventually getting brought back. This stage crowned a new mountain classification leader: Elmar Reinders. The Roompot – Charles rider was leading with 14 points, 1 more than Markus Hoelgaard and 4 more than Marc Hirschi.

Determined to keep his Sommervibber climber’s jersey, Elmar Reinders went once again in the breakaway on stage 6. He collected 6 points on top of Bleiken stasjon to strengthen his position. It was not enough however to be sure of keeping the jersey. Markus Hoelgaard and Marc Hirschi could both get it if they performed well on the Smeden (1st category). The breakaway got caught 15km before the finish line and the first rider to attack was Bjorg Lambrecht. The Belgian rode as hard as he could, and this benefited to Marc Hirschi, the only rider who could follow him. After a few kilometers, Tim Wellens joined them and even dropped them just before the top of the climb. Marc Hirschi reached the summit in second position falling 1 point shy of the Sommervibber climber’s jersey.

Check out the rankings here: https://tourofnorway.no/gb/pro-race/rankings/498/6-etappe

About the Sommervibber climber’s jersey:

The jersey is made by Santini and delivered by local provider Racing Depot.

Since 1965, Italian brand Santini has produced bicycle clothing for both pros and amateurs, ladies and men - and now also Tour of Norway. Santini is considered a pioneer in cycling clothing and has for many years produced the most sought-after cycling jersey in the world: the World Champion jersey. In addition to the World Champion jersey, Santini also supplies clothes for Team Trek-Segafredo and Team Coop.

Large supplier of team clothes for clubs and companies in Norway, Racing Depot is the country's leading racing / MTB supplier with stock and production in Sandnes. Racing Depot has over 30 years of experience in the Norwegian market.